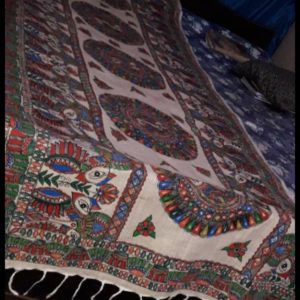 Madhubani Art (also known as Mithila painting) is an Indian and Nepalese painting style popular in the Mithila area of India and Nepal. It was called after the Madhubani District in Bihar, India, where it was first discovered. Fingers, twigs, brushes, nib-pens, and matchsticks are used to create this picture, which uses natural colours and pigments. It is distinguished by its striking geometrical patterns. There’s ritual content for special occasions like birth and marriage, as well as holidays like Holi, Surya Shasti, Kali Puja, Upanayana, and Durga Puja.