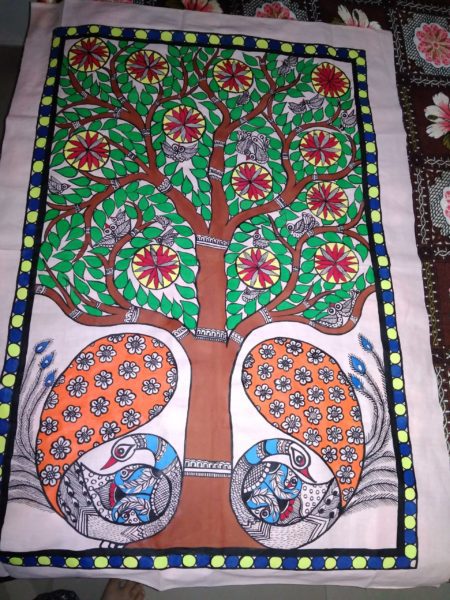 Wall hanging Attractive scenery is An Indian and Nepalese painting style called Madhubani Art (or Mithila painting) is practiced in the Mithila region. Because of its origins in India’s Madhubani District, the moniker “Madhubani” has stuck ever since. Natural dyes and pigments are used in conjunction with a variety of implements, including fingers, twigs, brushes, nib-pens, and matchsticks. With its eye-catching geometric designs, it stands out Special occasions like birth and marriage are marked by ritual content, as are festivals like Holi, Upanayana, Surya Shasti, Kali Puja, and Durga Puja.

Wall hanging Attractive scenery – Madhubani Paintings 2022, Women in the Mithila region of the Indian subcontinent traditionally developed Madhubani painting (Mithila painting). It came from the Mithila region of Bihar’s Madhubani district. Additionally, Madhubani is a prominent exporter of these works. The word “Madhubani art” was coined to describe this type of painting on paper and canvas that began in the villages around Madhubani, and it is these latter developments that have given rise to the term “Mithila Painting.”

Most of the time, the subjects of Madhubani paintings are people and the natural world as well as mythological figures and places. Sun, moon, and holy plants like tulsi are also frequently depicted, along with royal court scenes and social occasions such as weddings in Indian paintings. There are no voids in these paintings; instead, they are filled with images of flowers, animals, birds, and even geometric patterns. Citation is needed Painting was traditionally passed down from mother to daughter in the homes of the Mithila region, particularly among women. Institutions around the Mithila region continue to practice it. Madhubanipaints With Asha Jha, Kalakriti, Vaidehi in Madhubani district, Benipatti, and Gram Vikas Parishad of Ranti are some of the key centers of Madhubani painting that have kept this old art style alive.

Bharni, Kitchen, Tantrik, Godna, and Kohbar are the five primary types of Madhubani art, just like Wall hanging Attractive scenery each with its characteristics. In the 1960s, women of the Brahman caste in India and Nepal dominated the Bharni and Tantrik styles of Indian and Nepalese folk dance. They painted depictions of gods and goddesses, and their topics were primarily religious. Symbols and aspects of daily life, as well as the story of Raja Shailesh (guard of the hamlet), were shown in the paintings of lower castes from the region. Currently, Madhubani art is a globalized art form, thus there is no caste difference in the work. They can be used in any of the five different types of writing. There has been a lot of interest in Wall hanging Attractive scenery recently the subjects of Wall hanging Attractive scenery are people and the natural world as well as mythological figures and places.

The women of the Mithila region of India’s subcontinent have traditionally created Madhubani paintings (Mithila paintings). It came from the Mithila region of Bihar’s Madhubani district. This painting’s biggest export market is Madhubani.  The word “Madhubani art” was coined to describe this type of painting on paper and canvas that began in the villages around Madhubani, and it is these latter developments that have given rise to the term “Mithila Painting.”

Before, these paintings were painted directly onto fresh mud walls and floors, but nowadays they may be found on anything from fabric to hand-made papers and canvases.

Powdered rice paste is used to create Wall hanging Attractive scenery. The content and style of Madhubani painting have essentially remained the same over the ages, despite the fact that the art form has spread across the globe. Madhubani paintings are now protected as GI (Geographic Indication) artworks due to this development. The colours used in Madhubani paintings are taken from plants and are used in two-dimensional imagery. In order to achieve reddish-brown and black hues, the following colours are used: Ochre, Lampblack, and Red.