Mamta Sindur Set with wonderful color no side effect 12 pieces 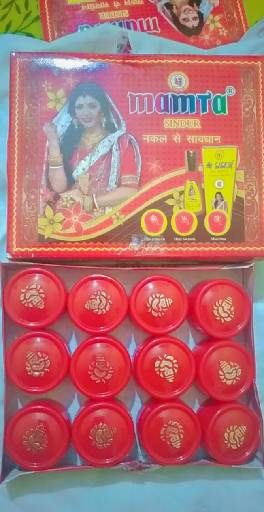 Mamta Sindur with wonderful color no side effect

Mamta sindur hygiene for skin, India’s Hindu faith places tremendous significance on the color vermilion, which is also known as kumkum. It is considered a symbol of matrimony for a married Hindu woman. It is worn by most Hindu women on a daily basis after being put on by the groom on the day of the wedding. Red powder is traditionally used to make Mamta Sindur. The beginning and power of a man and woman’s holy marriage are symbolized by the brilliant crimson of the ring. However, utilizing it in powder form has significant downsides. As a result of its powdered texture, it quickly clings to your clothing. While applying it, you run the risk of getting some on your face. As a solution, you can utilize products that come in liquid form with a simple applicator. Liquid cosmetics are available from brands including Lakme, LOTUS, and Colorbar. These goods come in a variety of crimson and maroon hues. Powder Kum Kum’s true red color, however, is regarded as superior despite its ease of use. Keya Seth Aromatherapy and Mamta Sindur are good options for persons with sensitive skin. These are constructed of 100 percent natural materials and are available in both dust and liquid versions.

Traditionally, sindoor is placed as a dot on the forehead or at the beginning or end of a woman’s parting line (also known as mang in Hindi or simandarekha in Sanskrit). In Hinduism, a sindoor denotes a married woman. Bindis can come in a variety of colours, although sindoor is never applied to the parting of the hairline of single women. A widow does not wear sindoor or bindis to indicate that her spouse has died.

Sindoor Daanam is a ceremony where the bride’s husband applies the first layer of sindoor to her on the day of her wedding. After this, she uses it on a daily basis herself.

For a widow, the removal of her husband’s sindoor is an important occasion. There are a number of ceremonies related with this. When a woman becomes a widow, her mother-in-law or older sister-in-law is more likely to remove her sindoor. The widow will take off all of her jewellery, including her bangles, bindi, and, for many, nose and toe rings. The splitting of hair is a metaphor for a river of life-giving blood. There is no life in a river that has had its sindoor removed. Rural people of various social classes and castes practise this tradition. [6]

The crimson Mamta Sindur has special significance for a married woman, who is known for her love of colour and vibrance. When she loses her husband, she wears only a white dress and no makeup, including the vivid red Mamta Sindur that she wore before.

The Mamta Sindur can be applied in a variety of ways, ranging from the purely personal to regionally specific. Sindoor is often applied to the entire hairline and forehead by newlyweds, however married ladies may choose to leave a little crimson mark on their hairline and forehead instead. Women in their 20s and 30s are increasingly sporting a diamond bindi on their foreheads as a fashion statement.

Most Jain women wear the Mamta Sindur in the city. Jain nuns are not allowed to use this on their hairline or foreheads. Unmarried women apply sindooram to their hair partings as a sign of their marital status, however in other local cultures, sindoor is applied to the hair of the groom.