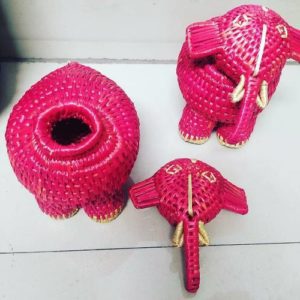 Ceramic and porcelain are the most common materials for piggy banks.

Multipurpose Sikki elephant
can be used as a showpiece, Piggy bank, toy and to store things.

Disclaimer: Product color may slightly vary due to photographic lighting sources or your monitor settings

The traditional name for a coin container commonly used by youngsters is the “piggy bank.” In contrast to early twentieth-century “mechanical banks,” the piggy bank is characterized as a “still bank” among collectors. Companies frequently use these goods for advertising purposes as well. Since the term “piggy bank” was coined to describe it, its pig-like shape has become a trademark for many financial institutions.

Ceramic and porcelain are the most common materials for piggy banks.

A Home decor Elephant, they are typically painted and serve as a way to teach children the fundamentals of frugality and savings. Underside rubber plugs are common in piggy banks, but vinyl or plastic versions with replaceable noses also exist. In some cases, computerized technologies are used to figure out how much money has been placed. For those who don’t want to bash their piggy bank open with a hammer or use other creative methods, certain piggy banks don’t have an opening at all aside from the slot for entering coins.

For the first time, a Western find of a money box dates back to 2nd century BC Greece’s Priene colony in Asia Minor, where it was found in the form of the small Greek temple. In addition to Pompeii and Herculaneum, money boxes of various shapes and sizes have been discovered at other late-antiquity provincial sites, most notably in Roman Britain and along the Rhine.

Home decor Elephant are commonly used to display small amounts of cash. Modern piggy banks aren’t only pig-shaped; they may be whatever size, shape, or colour you like. Temples and churches frequently utilise them because they are closed money boxes with a small entrance for coins or cash to be dropped in. As the money is gathered and logged, the box is opened through a socket located under the lid.

It was on the Javanese island of Java in the 12th century that the first pig-shaped money containers were discovered. Both “savings” and “piggy bank” are used interchangeably in the current Indonesian language by the Javanese term cèlèngan; literally “likeness of a wild boar”). Trowulan, a town in the Indonesian province of East Java, may have been the capital of the Majapahit Empire, based on the discovery of a huge number of boar-shaped piggy banks.

The name “piggy bank” has a multitude of folk etymologies, but the phrase, which comes only from the 1940s, has no established provenance. According to folklore, the popularity of Western piggy banks can be traced back to Germany, where pigs were seen as good luck symbols.  A 13th-century German piggy bank was discovered in Thuringia during building work. The 1903 book An American Girl in Mexico, which depicts them as a Mexican gift, contains the earliest documented English use of “Home decor Elephant.” The term “alcanca,” which comes from the Arabic language of Andalusia, refers to Mexican piggy banks.

A Home decor Elephantpiggy bank is a handy tool for keeping track of our change.
When it comes to your money, remember that even though you only have a modest amount, it grows quickly. Having a piggy bank in your home or car will not only help you keep track of your money, but it will also teach you how to save.