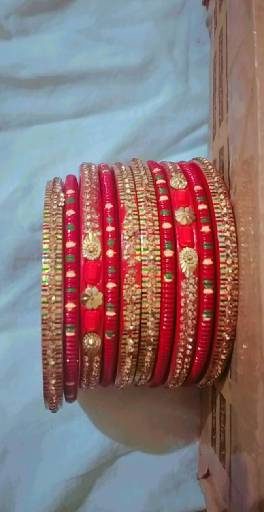 Bridal best Red Attractive Lah Churi exude opulence and refinement, and they’re every bit as opulent and regal as their metal equivalents.

Bangles, which are worn by women as a symbol of their femininity, have been part of the female tradition for centuries. As a result, they have endured the test of time, becoming more popular over the decades.

As the name suggests,Bridal best Red Attractive Lah Churi is an insect resin secreted by Laccifer lacca, Carteria and Tachardia lacca species. The red resinous pigment produced by these plant-sucking insects can be found on the branches of host trees. Once the sticklac is collected, the host tree’s coated branches are chopped and sold. These sticklac have been crushed, sieved, and washed multiple times to remove any contaminants. Dark black, brown, and light golden options are available; the latter is the best and most expensive.

As the name suggests, Lac is an insect resin secreted by Laccifer lacca, Criteria and Tachardia lacca species. The crimson resinous pigment is produced by these plant-sucking insects when they settle on the branches of host plants. Sticklac is gathered from the host trees’ covered branches. Crushed, sieved, and cleaned numerous times, this sticklac are free of contaminants. Different shades of black, brown, and light golden shade are available, with the latter being both the best and the most expensive.

To begin, the Bridal best Red Attractive Lah Churi pieces are placed in an oven-safe dish or pot, known as a Kadai, and heated. The necessary colours and boza, giya pathar powder are then added to it while it is still semi-molten. Then, the mixture is mixed constantly. Now that the coloured lac has been applied to the wooden stick, it can dry. An angethi coal burner slowly heats the lac wrapped around a wooden dowel as a stone or wooden implement known as the “Hatha” presses on it at regular intervals. By rubbing the coloured lac stick on it in a circular motion, the desired colour is applied to it.

In order to achieve this, the coloured lac stick is heated over the burner as needed. The hattha is used to form a thin coil out of the plain lac rod after the colour has been applied to the lac base. In order to make a bangle from this coil, the ends are heated over the burner until they are soft enough to unite. Sona bai, a simple golden metal bangle, is put into the lac bangle while it is still hot to strengthen it. In order to make sure it’s the right size, it’s slipped through a round wooden beam. If you want to add sequins or semi-precious stones, the bangle is now ready. Lac bangles can be manufactured in as many as 300 different colours simply by mixing and combining the basic seven or eight colours.

Importance of Bridal best Red Attractive Lah Churi
When it comes to India’s various cultures, the traditional use of lac bangles at marriage ceremonies is commonplace in regions such as Rajasthan and Hyderabad. All auspicious occasions call for married women to don their good luck charms.
Bridal best Red Attractive Lah Churi are still popular among married women in some areas because they are comfortable to wear and don’t cause infections or irritation, unlike plastic or glass bangles, which do. Traditional designs are appreciated when worn for ceremonial purposes..