In the name of Suryo dvipadmadhrak, Sasaptashve ekachare rathe Surya, Painting of Sun God, is depicted in the Agni Purana as a rider in a single-wheeled chariot driven by seven white horses. 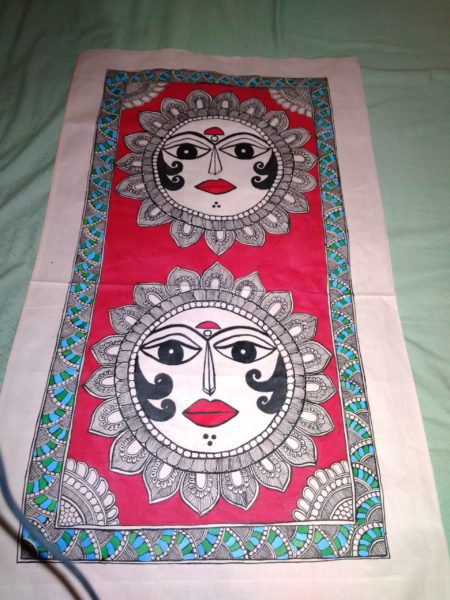 Surya is the name given to God’s manifested form in Hinduism’s sacred texts. He is regarded by the Vedas as the God of light, the origin of all life.

Before, the Painting of Sun God was painted directly onto fresh mud walls and floors, but nowadays they may be found on anything from fabric to hand-made papers and canvases. Powdered rice paste is used to create Madhubani paintings. The content and style of Madhubani painting have essentially remained the same over the ages, even though the art form has spread across the globe. Madhubani paintings are now protected as GI (Geographic Indication) artworks due to this development. The colors used in Madhubani paintings are taken from plants and are used in two-dimensional imagery. To achieve reddish-brown and black hues, the following colors are used: Ochre, Lampblack, and Red.

Sita Devi earned the Bihar State Award for Madhubani Art in 1969, earning Madhubani painting official recognition for the first time. A woman from Jitwarpur, India, named Mamta Devi, has also won a national award. In 1975, Padma Shri was awarded to Jagdamba Devi of Bhajparaul, Madhubani, and the National Award was granted to Sita Devi of Jitwarpur, also near Madhubani.

Personality and attitude are reflected in what you wear.  Painting of Sun God artworks allows you to express yourself in your home and office. The painting’s eye-catching hues and uplifting themes can help you infuse your space with positive energy. It brings your walls to life and adds a dash of elegance to your decor. Paperposters, wall decals, and stickers can all be replaced with this product. It is possible to employ photo frames in a variety of settings, from the house to the office to a hostel to a classroom to a corridor to a shop or cafe. After a few years, you can also use them to save your family’s photos. There may be a minor difference between the product image and what you see in person because displays and printers operate in different modes. Remove dust by wiping the surface with a damp cloth.

Painting of Sun God, Most of the time, the subjects of Madhubani paintings are people and the natural world as well as mythological figures and places. In addition to depictions of the royal court and social occasions like weddings, paintings of natural objects like the sun, moon, and religious plants like tulsi are common. There are no voids in these paintings; instead, there are paintings of flowers, animals, birds, and even geometric shapes to fill them in. citations needed Women in the Mithila region were traditionally responsible for teaching their children how to paint, a tradition that was passed down from generation to generation. Throughout the Mithila region, it is still being practiced and kept alive in institutions. Madhubanipaints With Asha Jha, Kalakriti, Vaidehi in Madhubani district, Benipatti, and Gram Vikas Parishad of Ranti are some of the key centers of Madhubani painting that have preserved this old art style.

Bharni, Katchni, Tantrik, Godna, and Kohbar are five unique Madhubani styles. Women of the Brahman caste in India and Nepal were the primary practitioners of Bharni and Tantrik styles in the 1960s. They painted depictions of Painting of Sun God and goddesses, and their subject matter was primarily religious. As a result, the paintings of lower castes depicted aspects of daily life, symbols from their culture, and even the story behind Raja Shailesh (the village’s guard). The caste structure no longer distinguishes Madhubani art, which is now a globalised art form. They’re versatile enough to work with any of the five different aesthetics. As a result of widespread interest in Madhubani Painting of Sun God.