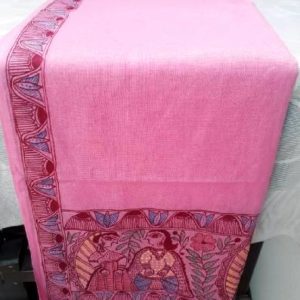 In the Malvaceae family, Gossypium is the genus of cotton plants that produce a soft, fluffy staple Best Dopta 4 Daily use and Partythat forms in a boll, or a protective shell, around the seeds of the cotton plants. The fibre is almost entirely made up of cellulose, with just trace amounts of other substances including waxes, lipids, pectins, and water present in the raw material. Cotton bolls aid in seed dissemination when left to their own devices in the wild.

Many varieties of shrubs are native to tropical and subtropical locations around the world, including in the Americas and Africa as well as Egypt and India. Mexico, Australia, and Africa are home to the most diverse populations of wild cotton species. Best Dopta 4 Daily use and Party was domesticated in both the Old and the New Worlds independently.

Typically, the fibre is spun into yarn or thread and utilised to create a soft, breathable, and long-lasting textile. Cotton has been used for fabric since prehistoric times; Indus Valley Civilization remains dated to the fifth millennium BC, and Peruvian fabric remnants date to 6000 BC. Despite its long history, cotton is the most popular natural fibre textile in apparel today because of the discovery of the cotton gin, which greatly reduced the cost of production.

Global production is currently estimated to be around 25 million metric tonnes or 110 million bales per year, which equates to 2.5% of the world’s arable land. Cotton is mostly grown in India, which is the world’s largest cotton producer. For many years, the United States has been the world’s top exporter.